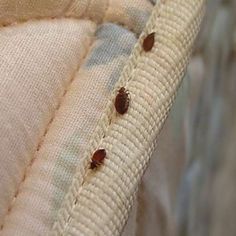 You likely already know that bed bugs are good at hiding. However, you might not know that they are good hitchhikers as well. What exactly does this mean? It means they’ll attach to the nearest attraction and hang on for dear life. Given their size, they’ll be even hard to spot when they are hitching hides or hiding in your luggage. This makes it easier than ever to introduce them into your home inadvertently. This is why it is best to just know how to force the pest out of hiding. The only problem is, you’ll receive varying answers and solutions as to how to do so.

Luckily, that’s the exact type of information this article is going to give you. Whether you are dealing with one or two bugs or a full-blown infestation, you’ll want to know how to force the pest out of hiding. These bugs like to nestle deep down into cracks, crevices, and bed frames, making them hard to even spot. Cleaning out and scouring every spot in the home is not always enough. Sometimes you have to know how to force them out of hiding and into plain sight.

Make Them Come Out

With the above in mind, there are several effective ways that you can force these bugs into the open. While doing so won’t cure your problem, it’ll let you know that you are, in fact, dealing with a bed bug infestation.

These pests usually come out to feed at night, meaning this is the time you’ll want to take advantage of. Once you spot where they are coming from, you’ll know which areas to target.

Start by relocating your bed several feet away from the wall. After doing so, you’ll want to utilize traps. There are many different traps available on the market and some are more effective than others. Some work better in some situations. Make sure you do your research to figure out which best works for your situation.

That being said, once the bed is away from the walls and the traps are placed around the legs, you’ll have to draw the bugs out. Many will naturally come out to feed, but some will stay behind. These will need to be forced out, and you can do so by activating the CO2 in the traps. They are attracted to the scent and will be drawn to it. These traps also come with refills so you’ll want to refill these traps and activate them again several times.

Steamers are also good options when trying to eliminate bed bugs. These items can also be used on walls and other parts of the home. The only problem is, steamers don’t always pass or penetrate through areas where these bugs hide. That being said, steamers have one distinct advantage by emitting heat. They emit heat and draw the bugs out.

Heat draws bed bugs out of hiding because humans also emit heat. The bugs will think that they are traveling towards a human target. The bugs will likely linger by the target for a few minutes before attaching and feeding. This is why steamers are such popular devices. Beacons are other popular traps, as they will allow you to continuously monitor the target area.

All you have to do is set the trap in a strategic area where you think bed bugs are hiding and it will emit CO2, drawing the bugs out of hiding and into plain sight. They’ll go to the trap and get stuck inside, where you can either discard them, give them to a professional, or simply let them starve out.

While high heat will not draw bed bugs out, it is always best to wash all your clothes, linens, and sheets in hot, soapy water. The hottest setting possible! You’ll want to do the same when drying. The heat will dry out the bugs and kills them.

When trying to draw bed bugs out of hiding, there is no set rule that says you can utilize more than one trap. In fact, this might be the most effective approach to the situation, as not every trap will work in every situation. Use a variety of traps that employ different tactics and place them in strategic areas through the home or office.

A surge is an effective trap, as it’ll emit both heat and CO2. As with other traps, the surge comes with refills, allowing the trap to be utilized over and over again. With the right tools and knowledge, it’s fairly easy to draw bugs out of hiding and into your traps. Pest Control Denver

A Comprehensive Guide For Mice Extermination In Denver

As a homeowner, there is an abundance of pests, insects and bugs that can infiltrate your home and turn your life upside down. Unfortunately, many

Throughout the years, Denver residents have been required to deal with a handful of different complications. Although some of these are avoidable, others are not.

Finding a rat lurking in your kitchen cupboard or bedroom closet can be very disturbing. Of course, it is only natural that you will let

The Best 9 Ways To Fight Your Bed Bug Problems

It was the introduction of pesticides that saw the end of bed bugs after World War II. While the bug was still around, they all

If you’re dealing with a bed bug infestation, you’ve likely spent hours maybe even days scouring the Internet searching for information on how to handle

What To Look For When Hiring An Exterminator In Denver

Bed bugs are starting to show up more and more in the United States. Due to this fact it is important that you get to

Do Just A Few Bed Bugs Mean You Have A Full-Blown Infestation On Your Hands?